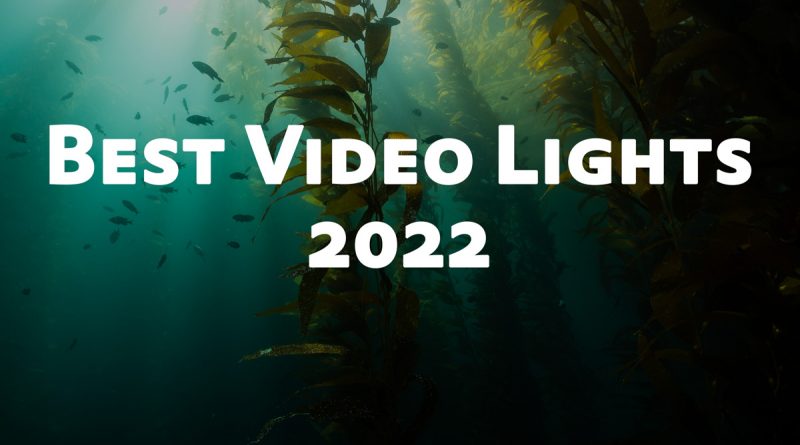 Artificial light, like a video light, is the best way to bring vibrant color and contrast back into your underwater photos.

Underwater video lights can be used to shoot video or still photos, making them a versatile tool for those who want one or two versatile light sources. This is the new photographer on a limited budget, the video shooter who occasionally wants to shoot some still photos, and the macro still shooter who needs a focus light.

That’s a lot of applications for the video light, but it’s important to note that still photographers will generally choose a strobe instead of a video light. But if you fall into one of the categories above, one or two video lights is the best way to build your underwater camera rig.

We’ll break the lights down into two categories: Focus Lights (used by all macro photographers); and Video Lights (versatile for all applications).

Before we jump into the 2022 video light guide, let’s review a few of the essential features used in comparing the lights.

The lumen count of a video light is the power it produces. In simplest terms, the more lumens the light has, the brighter the light. There are other very important factors that relate, like the smoothness of the beam (lack of a hotspot), and the kelvin temperature of the light, but the general shooter doesn’t have to worry about these things with the quality of lights on the market now.

What is the difference between a Flood Beam and Narrow Beam Angle?

The beam angle of your light is how wide the beam is at a fixed distance. An average dive torch, for example, may have a narrow 60-degree spot beam. This is excellent for shining farther through the water, indicating where a subject is, and general dive applications.

Underwater video lights use a flood beam, generally between 100 and 130-degrees. This wide beam doesn’t travel nearly as far through the water, but it even lights the scene directly in front of the camera without producing a hotspot of intense light.

Be sure to consider the type of battery in the video lights you’re comparing. Batteries are strong and reliable today, so the feature to look at is whether the battery is interchangeable.

When your light has interchangeable batteries and you’re planning a full day at the beach diving, you can purchase extra batteries and replace them in between dives as needed. But if you need to plug the entire light with built-in battery into the wall, you will need to give up the light in order to charge it, which becomes difficult if electricity is not readily available.

Lights vs Strobes; Why you NEED Lights Underwater

You support this site. Gear links are my sincere recommendations at the best prices online (at time of last update) and may earn us a small commission. Thanks for your support.

There are many different lights available today. I’ve focused this guide on the brands I’ve spent many hours using and trust, with solid price to value and quality. These are the lights I recommend first.

I haven’t included some of the much more expensive lights, as those are geared more for the pro market. We’ll also skip over some of the more advanced specs, like CRI (Color Rendering Index), in order to focus on the most practical information for beginner and intermediates looking to invest in underwater lights.

The Kraken Hydra 1000 is not just another focus light! What makes it special are the snoot condensor and color filter accessories that attach to the front. This opens up infinite hours of creative macro photo lighting. I’m a big fan of 1,000 lumen lights, and this one looks awesome.

The GoBe 1000 Wide FC light is extremely versatile. It works underwater down to 120 meters AND on land (most dive lights shouldn’t be used on land), has a 90-minute burn time on full power, power level indicator, and various mounting options.

The interchangeable GoBe light heads are very cool, allowing you to use different lumens, beam types, and even blue light or red light. One downside is that you can’t flip between white and red light, which is a really nice feature for a focus light.

The Light & Motion Sola series are classic macro focus lights. The 1200 focuses on delivering what you need at the highest quality in an affordable package. Built in Monterey, California, the Sola 1200 has white and red beams and lasts 70 minutes on full power. Note that the light is factory sealed, so while that virtually eliminates chance of flooding, the entire light must be plugged in to charge.

The top switch is extremely easy to flick on and off with a finger push, instead of needing to grab the entire light to depress a switch.

The Fisheye FIX NEO brings high quality at a high focus light price. It features a white flood beam, spot, and red beams, with a burn time of 90 minutes at full power. Micro USB charging is nice because while you need to plug in the entire light, you can charge it with a portable battery (like you would use for a mobile phone).

The Kraken ring light makes macro photos easy. The light produces an even, diffused lighting from all sides of the subject, eliminating harsh shadows. There’s also no need for light positioning since you simply bring your camera lens close to the subject for a well-lit image. The light power is 1,800 lumens with an optional burst (triggered via fiber optic cable) of 3,000 lumens.

The Sola Video 2500 Flood is the base model of their newest generation of lights. This light features a 2500 white 60-degree beam, plus Light & Motion’s standard switch and battery power indicator. The batter lasts 40 minutes on full power, lower than lights at slightly higher price points.

You can’t go wrong here if looking for a high quality video light at a low price.

COMPARE: The similar Sola Video 2000 S/F is priced a bit higher with longer battery life and ability to use both flood and spot beams, but if you’re using the light simply for underwater video, and are on a budget, I’d rather have the extra 500 lumens than the extra spot beam.

The Hydra 2500 WRU Macro Edition features a 100 degree flood beam plus red and blue beams. The light earns the macro designation for two reasons. First, you can sync it to your camera to fire a 4,000 lumen burst (regularly 2,500 lumens). Second, you can attach an optical condensing lens to intensify the light down to about 20 degrees (think constant light snoot).

The Sola Video Pro 3800 is a solid light. 3800 lumens, wide 110-degree flood beam, 50 minute run time on high power, effortless on/off switch, and innovative dome port for gentle light fall off all make this light ready all sorts of underwater filming. The light weight is also nice. Note that the built-in battery will last one or maybe two dives max, so if you’re on the boat all day with no electricity you’ll need a second pair of lights.

The Backscatter Macro Wide 4300 is a versatile light for those who want one light that does it all. Shoot wide-angle video at 4300 lumens, 1300 lumens in a special macro video mode, or use it in red mode as a focus light around shy nocturnal marine life. The light is compatible with Backscatter’s color filter system and the Backscatter Optical Snoot (OS-1) for creative macro video. The dual NL2150HP batteries are replaceable, which allows you to purchase multiple sets and keep shooting all day before recharging.

Learn single and double strobe positions for macro and wide-angle, and how to minimize backscatter in each position.

Master basic underwater video techniques that will take your footage and editing to the next level.

How to Pack Underwater Camera Gear