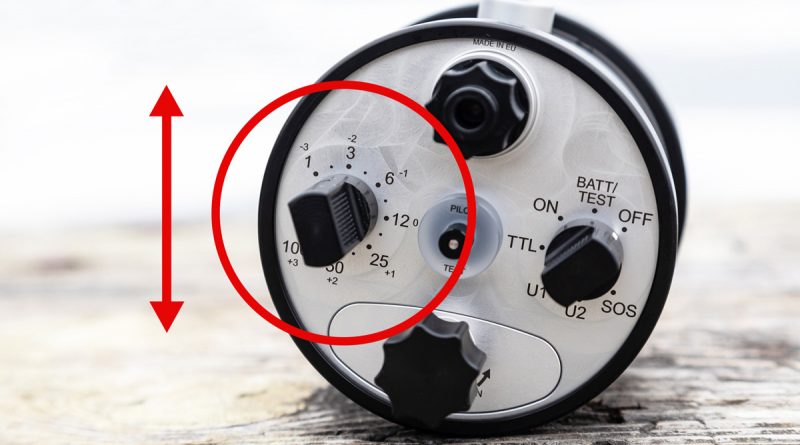 Reading the numbers on our underwater strobes can be quite confusing. Nearly every strobe manufacturer uses a different number system, making it tough to find information on how to correctly use the power control knobs.

This article and video explain these numbers in detail, revealing the secrets that only savvy underwater photographers have understood until now. Watch, read, and soon you’ll be precisely controlling your automatic or manual strobes with ease.

What do the Numbers on your Strobe Mean?

TTL Numbers On Your Strobe

Nearly all strobes will feature TTL, or automatic, numbers around the power control knob. Entry level strobes exclusively use TTL shooting, while mid-tier and pro-level strobes use both TTL and manual power numbers.

TTL is a photography acronym for “Through the Lens”. TTL shooting uses two flash bursts. In simplest terms, the first burst exposes an image through the lens and onto the camera sensor. The camera meters this, determining how much to adjust the brightness of the strobe flash, then fires a second flash at the adjusted power in order to produce a properly exposed image. This whole process takes fractions of a second.

The TTL numbers on your strobe relate to adjusting this automatic exposure, referred to as Flash Exposure Compensation. If you feel the camera’s automatic flash exposure is a bit dark, you can override this by manually adding more power to the strobe. This is often done in 1/3, 2/3 or a full 1 stop of light.

Since the flash exposure can be adjusted up or down (more or less power), this guide begins at zero.

When shooting in TTL, always keep your power control knob at zero.

You only need to adjust the knob to the Positive (+) or Negative (-) numbers if you feel the camera is over or underexposing the image. And while I want to keep this as simple as possible, remember that there are other factors affecting overall exposure, like Strobe Positioning.

Manual Power Numbers on your Strobe

Most mid-level and pro-level strobes feature manual flash power adjustment. The concept here is fairly simple: you manually adjust the flash output from minimum power to full power. The confusing part is how these power numbers are indicated on the strobe since it’s different for most manufacturers. You might see numbers referencing the flash exposure compensation above, a simple 1-10 or 1-100 number scale, or guide numbers from 1 to about 32.

IMPORTANT: Depending on the strobe, 50% power is not always located halfway between minimum and full power, since flash power is reduced exponentially. For example, you might switch from full power to half power in just 2-3 clicks even though you have 10 clicks of adjustment. Studying the images below will help this make sense.

If you see these decimal, fraction, and + or – numbers, then you’re looking at the flash exposure compensation numbers. For manual shooting you will ignore these numbers knowing that turning the dial completely one direction is the lowest power output, and turning the dial completely in the other direction is the highest power output. The Inon flash below is a good example of this.

Number scales are my favorite representation of power level since they are easy to understand in one glance. 1 is the lowest power output and 10 or 100 is the highest power output. Ikelite’s scale varies slightly as they show full power and then power reductions in terms of stops of light (see the DS160 image below).

Retra strobes use a 1-100 system to measure manual strobe output and simple +/- full numbers for TTL shooting. Notice that the numbers on back of the strobe are oriented so that they are displayed right-side-up when the strobe is mounted to arm and camera. This is an obvious sign that Retra incorporates real world feedback from top photographers in their designs.

The Sea & Sea YS-D3 Lighting dial has a notch indicating either TTL flash exposure value or the manual strobe power expressed as a guide number. The YS-D3 has a guide number of 33, which equals full power.

The Ikelite DS160 has a setting for TTL and then expresses manual strobe power through a “Full” power setting and then reductions in strobe power measured as stops of light (with 1/2 stop increments).

The Inon Z330 shows power reductions on the back of the strobe, as indicated by a key next to the mode knob showing you how to read those numbers. -0.5 is full power and -6 is minimum power, which is confusing until you realize that turning the knob clockwise increases power, which is the most intuitive direction for muscle memory retention.

SeaLife is known for very easy camera operation and the Universal Flash follows this tradition. Notice the A label for Automatic (TTL) shooting and the 1-10 numbers for manual flash power.

The Kraken KR-S02 is both a video light and strobe, which is why we see both a blue and white control dial. The white dial is labeled “Flash” and the size of the dots give a quick reference to manual strobe power control. Notice also that the controls will be right-side-up once mounted on the camera for easy real-world use.

I’ve added a shot of my older YS-D2 to show how creative each manufacturer is in helping the shooter understand how to control their strobe. On this model, the top half of the circle is TTL flash exposure compensation, while the bottom half is manual power control expressed as guide numbers.

Strobe comparison and buyer’s guide, including insightful tips on each flash.

Learn how to position your strobes for macro and wide-angle. Single & double strobes!

How to Minimize Backscatter

Learn the causes of backscatter and 3 steps to reduce and/or eliminate it.