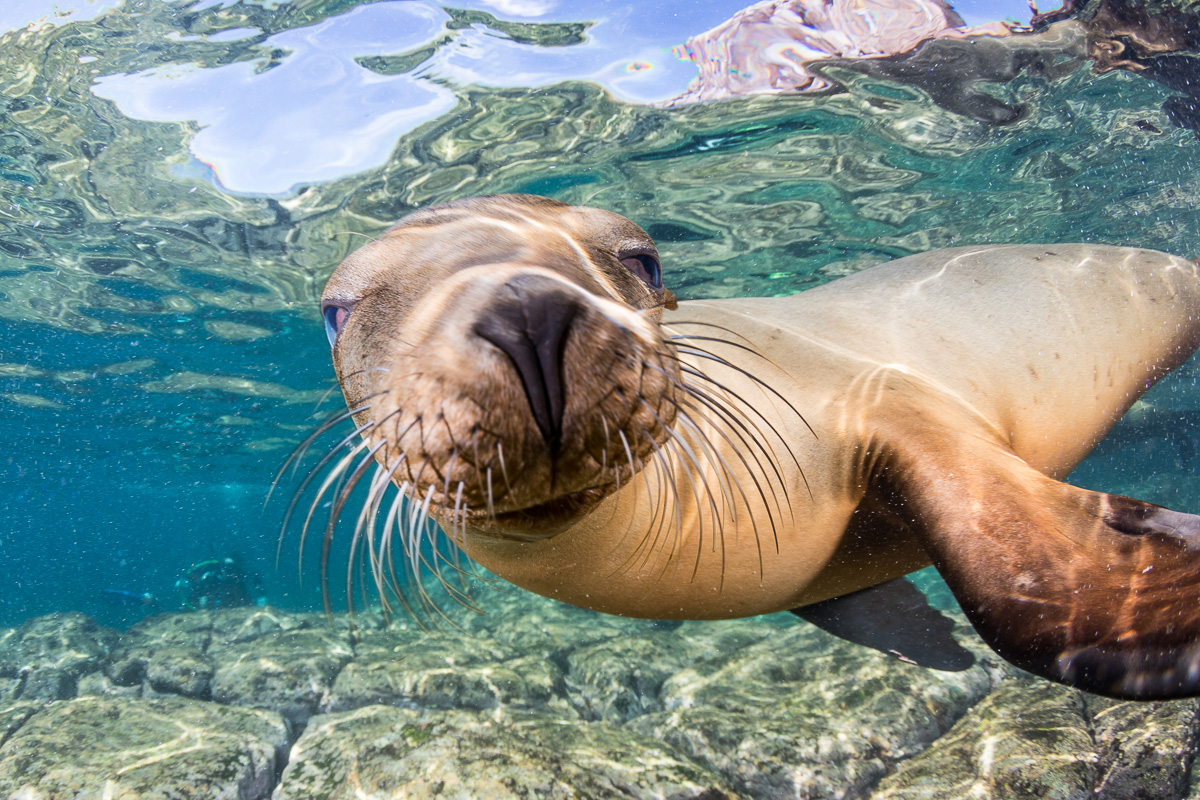 Diving with sea lions is the ocean equivalent to playing with a friendly dog at the park. The pinnipeds are full of energy… or lazily dozing off in the sun. They will bark, swim around in speedy arcs, play with toys, and even perform acrobatic moves that make you think it’s a private show. If you’ve dived with sea lions then you know what I mean!

Where to Find Sea Lions

You’ll often find sea lions enjoying the sunshine from rock outcroppings, napping on buoys and docks, or gathered with hundreds of others at the big colonies. My favorite place to see them is chasing bait balls off the California coast, although it takes many hours in the kayak for one fleeting encounter. La Paz is my favorite guaranteed sea lion action!

Sea Lions are Not Seals!

While both are pinnipeds, sea lions are different animals than seals. The easiest way to tell the difference is by looking at the head. Sea lions have a dog-shaped head with little ears, while seals have more bulgy eyes and no ears. Sea lions also tend to be brown in color, while seals are a mottled grey.

Experienced divers will recognize the different flippers and swim styles, ability to move on land, general behaviors; clear indicators on whether the mammal is a seal or sea lion.

Like all marine mammals, sea lions have complex social structure and behaviors. Learning about these aspects of their lives will help you to have the best dive possible, putting yourself in position for the best interactions. As an underwater photographer, this is what I’m looking for on every sea lion dive.

Gear: Check out the Photo Gear I Use

Sea lions are extremely social animals, which is why you hear them barking as soon as the dive boat approaches the colony. For big animal divers who often chase elusive and shy subjects, this is a very rewarding way to start a dive. Often, the young sea lions will jump into the water in anticipation of playing with divers and their fun bubble streams.

Within the larger colony, sea lions form many different subgroups. Dominant males will take charge of a harem of females, protecting them, and their territory, from other males. Being the boss is a tough job, however, and these harems do shift as the males become tired from the constant work and lack of time to go hunt and stay strong.

The fights between males can be very aggressive and violent, often leaving battle scars. As scuba divers, this is important to know, because the alpha male will be keeping an eye on you in the water. He will often swim by divers just so that they are aware of his presence and know that his territory is close by. The bull sea lion will also warn an advancing diver of their intrusion first by indirect swim passes. If the diver proceeds further, the bull will then start making more direct approaches, barking and blowing bubbles. This is definitely the “go-no-further” point of a dive site, and I haven’t seen anyone careless enough to approach further than this point. That’s because the females and the pups are the main attraction at a sea lion colony!

Female sea lions and pups will also form subgroups in the colony. Mature females are often very relaxed, floating on the water and oftentimes found warming up (thermo regulating) by floating with one fin sunning above the surface. These calm mammals will often let a calm diver slowly approach to spend quality time floating together, either enjoying the moment or shooting a few photos.

The pups gather in groups of similar ages and will steal the show at any sea lion colony. At ages of a few months to two years, these pups love to play. They will chase each other at top speed in the water, drawing lines and arcs that even breach the surface. The pups will wrestle with each other in much the same fashion as young (land) dogs, and will often get excited if you show excitement as a diver. Many sea lion divers carry little toys to entertain the pups, as they can’t resist coming in to investigate and mouth the colorful object. A classic scene is watching one or even three sea lions nibble and tug on your fins as you try not to giggle through the regulator.

The excitement of diving with these sea lions pups is what keeps divers coming back for the experience again and again. These subtle cues will help you to spot the most appealing sea lions to visit even before you jump in the water, and that’s important, because once you join these pinnipeds you won’t want to leave the water!

How to Photograph Macro Behavior Underwater