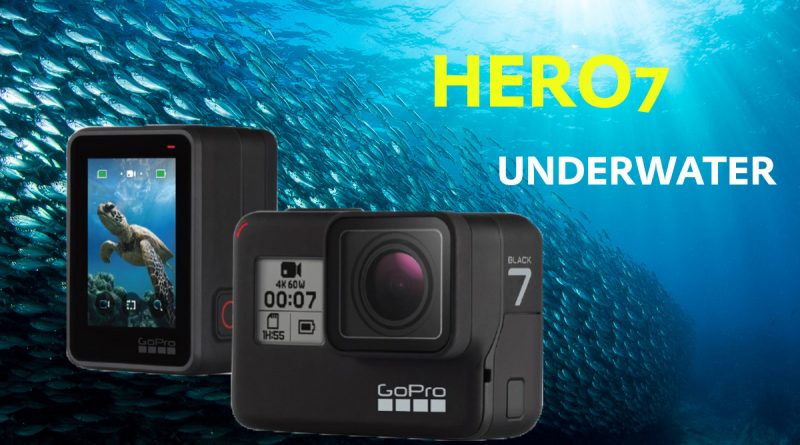 This guide discusses the best settings for shooting underwater video with your GoPro HERO7. So if you’re a scuba diver, freediver or just heading out on a water-themed trip, you’ll want to set up your GoPro following these tips.

HERO9 or HERO8 or other GoPro model? Check out my ultimate guide and tutorial video for the Best GoPro Underwater Settings.

I’ve also written some initial thoughts on the GoPro HERO8. For the HERO9, I’ve got a whole video series coming to my YouTube channel.

Which GoPro HERO7 Do I Buy?

There are three different versions of the GoPro HERO7: Black, Silver and White. The obvious difference between the cameras is the price, but the real question is whether the more expensive models are worth the investment. This depends on what you plan to film.

Only the GoPro HERO7 Black edition is compatible with the Super Suit dive housing, which is necessary to dive below 33ft (10m). This makes it the obvious choice for scuba divers and serious freedivers.

This can be broken down into two specific values. 4K video is great, however since 1080p is generally all you will see and stream online, we can argue that it’s too much resolution for most people. On top of that, you need a more powerful computer to process 4K video.

On the other hand, if you film in 4K but share your video in 1080p, you can crop in on the footage while post-processing. This is very useful when applying stabilization during post, cropping backscatter from underwater video lights, or zooming in for a better view of the subject.

All video is filmed and edited at a specific frame rates. If the frame rate of a clip doesn’t match the frame rate in the editing timeline, it can be converted to match. Most underwater video shooters use 30fps or 60fps.

So which is better? 30fps will deliver great video, however 60fps will allow you to slow the footage down for 50% slow motion when editing in a 30fps timeline. That’s a huge benefit!

Battery: The GoPro HERO7 Black has a removable battery, which means you can buy multiple batteries and swap them out during a full dive day. The Silver and White models have a built-in battery, requiring you to plug the camera directly into a power source in between dives, which isn’t enough time for a full charge.

Stabilization: The GoPro HERO7 Black has that sweet, sweet HyperSmooth stabilization. The others don’t.

Slow Motion: The faster the frame rate, the more you can slow down the footage to create a slow motion effect. The HERO7 Black allows you to shoot 1080p at 240fps, which produces 8x slow motion at 30fps. Sweet!

The GoPro HERO7 Black edition is the only option for scuba divers and serious freedivers, since it is the only model compatible with the Super Suit.

Snorkelers: If you plan to really start creating edited underwater videos with your GoPro, then go for the Black edition. Not only does it excel in the areas above, but it has other great features like Protune (advanced manual settings), SuperPhoto (glorified HDR), a GP1 chip.

And hey, maybe you’ll start diving deeper at some point!

There are a number of different ways customize your video settings, and each depends how you plan to use the footage. Let’s break it down into Easy Sharing, High Resolution, and Fast Action.

1080p / 60fps: This resolution and frame rate have a number of benefits. First, the 1080p video can be uploaded directly to almost all phones and to social sites like Instagram and Facebook. Second, 60fps will allow you to slow the footage down by 2x if you decide to play with editing software like GoPro Quik.

4K / 60fps: 4K is the way to go if you’re planning to do some real post-processing of your video. 60fps is the fastest frame rate on the HERO7, so it’s the best choice.

HyperSmooth: Different underwater videographers have different styles, so I encourage all shooters to experiment with this footage during some test dives. This way you can decide if HyperSmooth provides the stabilization you need.

Tip: Shoot in Protune if you plan to do any color grading while post-processing. Learning the ins and outs of Protune is invaluable for serious GoPro underwater video shooters.

1080p / 240fps: For fast action, I’m assuming we’ll want to add some dramatic slow motion to the edit. The HERO7 Black edition’s 240fps is more than up to this challenge.

Tips: As above, check out HyperSmooth and Protune settings.

Filters for the GoPro HERO7

Underwater filters will help bring color back into your underwater video. One of the great things about anyone upgrading to the HERO7 Black is that the Super Suit uses the same filters as several previous GoPro models – no need to buy new filters!

Read my complete guide below on GoPro Filters, video lights and color correction, including a complete Buyer’s Guide for filters and lights.