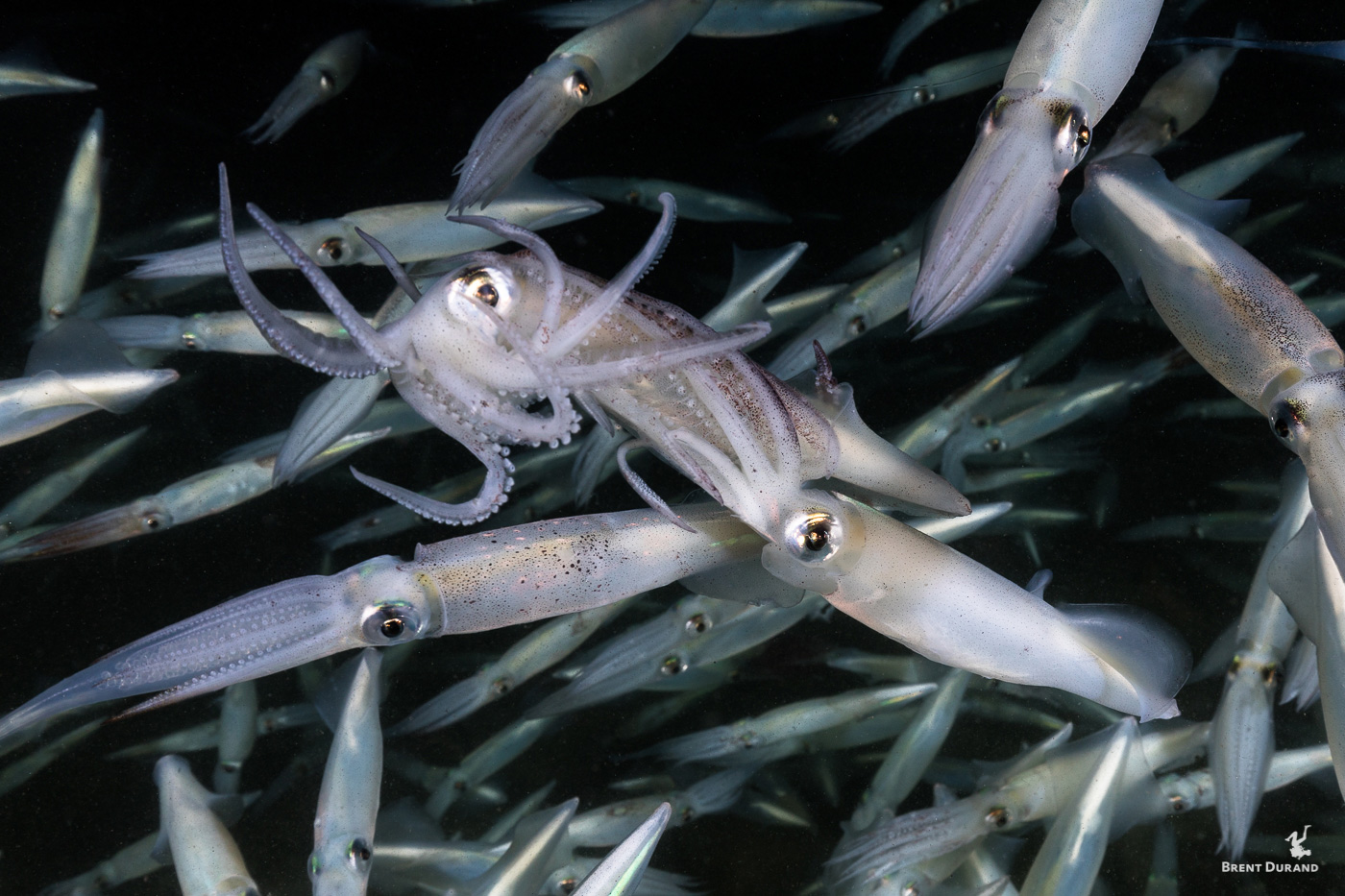 Most years, Southern California is the site of a special marine life aggregation, treating locals to one of the most unique dives in the world.

Hundreds of thousands of market squid (Doryteuthis opalescens) swim into recreational dive depths to mate and lay an expansive canvas of egg baskets (collections of eggs) across the sandy substrate. Because so many squid can be present, and because they are attracted to divers’ torches, the dive is spent immersed in a cloud of these small, excited squid.

When & Where to Dive the Squid Run

The squid run is hard to predict but usually occurs in December. Avid divers surveying the canyons will see indicators of a pending squid run: a lone squid or two during a night dive, solitary egg cases attached to the substrate here and there, and moon phase clues.

The most popular area for divers to experience the event is the submarine canyon in Redondo Beach (Los Angeles), as it’s a very accessible night beach dive. The site is well-known within the dive community as Vets.

The market squid are a nearshore species that live six to nine months and spend most of their time at deep depths, migrating vertically at night to hunt. The eggs will hatch anywhere between two to four weeks after being laid. Since the long cases are attached to the sand (in groups called baskets), the surge from ocean swell will oxygenate the eggs naturally.

A squid dive begins like any other night beach dive in Redondo – gearing up in a parking lot. The difference is that there’s an electric excitement in the air, more divers are present, and you’re sure to encounter friends preparing for their dive. Squid fishing boats sit offshore over 60m of water – beyond the reach of divers (market squid fishing is a major commercial fishery in California). Only a gentle staircase and 30m of sand separate divers from the ocean.

The squid lay eggs up to about 20m, so divers get a chance to enjoy a descent down the steep sandy slope of the submarine canyon before starting to spot the white egg baskets. At first, a few squid approach, but before long, divers will become engulfed in a pulsating cloud of white market squid. But this is a mating aggregation; the male squid are constantly lunging after female squid – sometimes three or four at a time. When a male squid successfully pairs with a female, his tentacles will turn crimson red to warn other males to stay away.

This cloud of squid is the highlight of the dive, but there is so much more action during the squid run. Female squid streak low across the sand while trying to lay and place their egg cases into a collection (an egg basket). Shrimp, crabs, rays, and even small sharks join the party, becoming so full of food they are lethargic.

Divers who venture off the sand into more open water may even hear the sound of hunting dolphins, and with that, rapidly passing shoals of squid that dart one way and then the other. It’s spectacular.

Photographing the squid run is deceptively challenging. Strobes must be positioned to avoid thick backscatter, and oftentimes the density of squid bodies blocks strobe light from reaching the subject. The fast movement of the squid and the layers of subjects make one want to point and shoot, however this technique often renders the subject squid out of focus. Shooting macro views of the eggs also proves challenging, as the cases can sway back and forth by 10-20cm in the surge, making focus and composition a very fluid exercise.

Before long, it’s time to ascend up the canyon slope into shallower water. The squid will follow dive torches to a point, but then turn around and go back to their business. Crabs run across the sand, rays watch carefully, and divers chimp through photos as they offgas on the way to the surface and the lights of the Redondo Beach Pier.