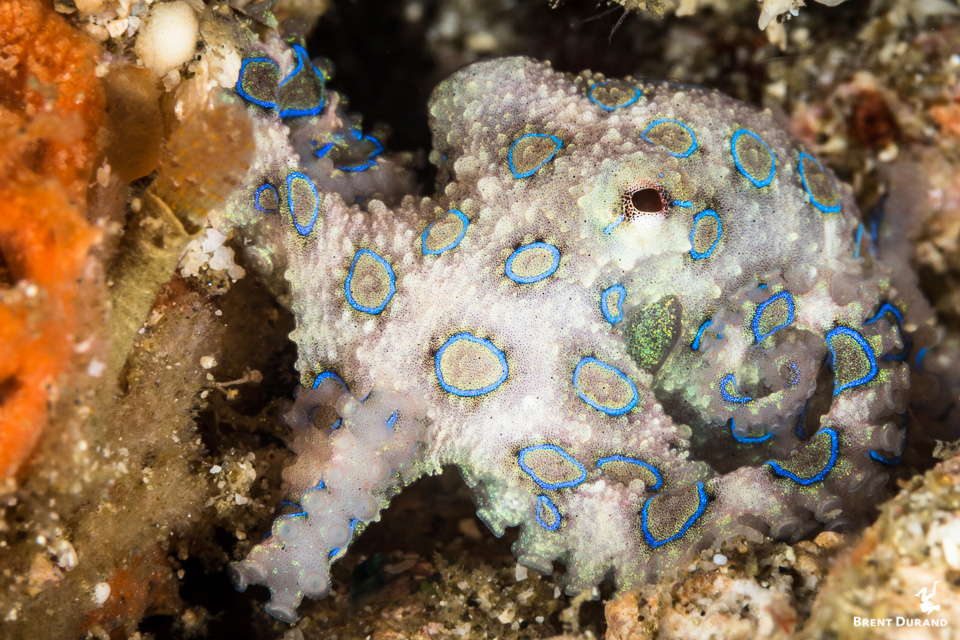 The blue-ringed octopusis one of the deadliest marine animals in the world. A small, well camouflaged mollusk, it is commonly found in rubble reef areas of the Indo-Pacific ocean. A blue ring’s bite contains the neurotoxin tetrodotoxin (TTX), which can easily paralyze or even kill a human. Luckily, these octopus are not violent and would rather hide from humans than bite in defense.

About the Blue-Ringed Octopus

The blue ring earns its name from the many different iridescent blue rings covering its body. Like all octopuses, the blue ring can change texture and color to mimic surrounding habitat, making them very difficult to spot. The general body color is white to yellow and brown, and the rings will glow more intensely if the octopus is stressed and issuing a warning.

The blue-ringed octopus body is normally white in color, but will flush to a dark yellow if the octopus is swimming quickly (e.g. away from disrespectful divers). This is because their circulation isn’t made for these rapid endurance swims. Like all octopuses, blue rings have three hearts: one to pump blood through the body and one to pump blood over each of the two gills.

The name Blue Ring is actually a genus called Hapalochlaena, which is comprised of several blue-ringed members. We’re familiar with the well-marked Greater blue-ringed octopuses usually found in underwater photos, but let’s not forget that the Mototi Octopus should also get a shout out for possessing the same TTX venom even though they sport only one ring on each side.

The female blue ring is larger than the male, although the male is responsible for courting the female and grabbing on. He then uses one special tentacle, the hectocotylus, to deposit sperm packets into her mantle. The female will carry the developing eggs, oxygenating them frequently, under her arms until they hatch. This is a tough job and prevents her from eating, and like all female octopuses, she dies when the eggs hatch.

These are very small octopus, growing to about the size of a golf ball. They’re so small and well-camouflaged that you can very easily swim right over them even when scanning for macro critters.

Blue rings are fearsome hunters, crawling across the reef using their tentacles to reach into every nook and cranny for tiny shrimp, crabs and other crustaceans. When the blue ring locates prey they will jump on it, trapping the prey in the webbed part of their tentacles, grabbing it, and moving it to their beaked mouth for a venomous bite.

Finding a blue ring is always exciting. They are challenging to find because of their small size, camouflage and rubble habitat. Your best bet is to let your guide know that you’d like to see a blue ring, and then do an evening or night dive in an area where there have been the most recent sitings.

You’ve honestly got just as much chance of seeing blue rings during the day, but octopuses are generally known to hunt more at night; that movement is how you’ll spot them.

Fun Fact: Blue rings are so camouflaged that I had a workshop guest shoot a photo of a critter and only notice the blue-ring in the background once reviewing the image in his LCD screen. Needless to say, he was stoked and we all shot a few frames.

Where to Photograph Blue Rings

Blue-ringed octopus are endemic to the Indo-Pacific ocean, so most of us will need to plan a dive trip to find them. A focus on underwater macro will give you the best odds of spotting octopus, since your eyes will be trained on the tiny critters.

Be sure to tell your dive guide that photographing a blue ring is at the top of your list, and if you’ve become friends, your guide will hunt for them every time you’re busy shooting another critter. The sign for a blue ring is to make a circle with thumb and index finger and placing the circle up and down your arm… the same pattern the octopus sports.

These are my favorite blue-ringed octopus hotspots:

Maybe it’s because I’ve spent months diving in Anilao, but I’ve seen blue-rings there at quite a few different reef sites. You’ll also be treated to some great mimic octopus action.

The muck capital of the world is home to plenty of blue-rings near rubble reefs. Guides here have a knack for finding wunderpus octopus too!

You never know where you might see a blue ring, so keep your eyes open in Manado, Raja Ampat, Bali, Dumaguete, Puerto Gallera, Milne Bay, and basically any other popular macro destination in the Indo-Pacific ocean. Blue-ringed octopus have even been seen in southern Japan and eastern Australia. Feel free to email me the location you’ve seen a blue ring and I’ll add it to the list!

Keep these tips in mind to help you bring home some great blue-ringed octopus photos. Also be sure to brush up on my tips to photograph marine life behavior.

1. Prepare your shot in advance

Most of the time you’ll be with a guide and dive buddies when finding a blue ring, so maximize everyone’s time by adjusting your settings, donning/doffing a diopter, and positioning your strobes before moving in and taking a turn with the subject. This ensures you can shoot 3-4 effective shots before letting your buddy move in for their turn. Here’s the underwater photo gear I use for macro subjects.

If you chase, the octopus will flush a dark color, which doesn’t look natural in photos. If the octopus swims, it will likely stop very close by. You can then move slowly over and take another shot. If you’re calm and patient, the octopus might even become comfortable and start hunting again without worrying about you. We’re after natural, comfortable posturing and behaviors.

Octopus have large mantles and even larger tentacles, but the most critical part to keep in focus is the eye(s). Be sure to move your focus point into a position that allows you to compose the shot while ensuring the camera locks focus on the eye. Learn more in my Two Minute Tutorial video on Autofocus.

Lighting is always important for macro photography. Check out my tutorial on underwater strobe positioning for a complete guide to the best strobe and video light techniques.

If you’re an avid photographer, I highly recommend two ID books by Paul Humann and Ned DeLoach. Reef Fish (Tropical Pacific) contains all the fish, and Reef Creature contains everything else. I haven’t met these guys, but they’re the bosses in this department.

Read my guide on the Best Fish ID Books!